Skip to content
I would say that Verse5ve is one of those names that will keep popping up in our conversations. Every time there is a new project being dished out i get excited for these guys because it is always a reminder that ideas and visions do get actualized. I`ll say that this one is for the people who have ideas and visions that they ardently wish to pursue. These things come to pass. This one is for the amigos who have been at it grinding to actualize their visions and the setbacks keep popping up. These things may take time.
This post will fill in the gaps for you if for some reason you have no idea what Verse5ve is about. So these ninjas are at it again. With the fuego and the never disappointing releases. This time, they are taking it to another level for christian artistes in the Hip-Hop scene. Take a read to learn more.

THE PRESS RELEASE
After the most recently concluded Famous5ve event, which hosted Multiple Award Winning American Artist – Sho Baraka, Verse5ve is on a roll as it announced operations of their new label – Agency5ve – today. Agency5ve, which is set to release its first product in the next few days, will majorly deal with all its artists’ brand management; marketing; music publishing; touring & merchandising; major partnerships and new business ventures for the brands on its roaster.

Agency5ve will officially be home to newly signed multi-talented rapper/artist Muhanjii in label. Muhanjii is a former member of The T412 Rap group and recently featured on Verse5ve’s recent Famouse5ve’s Open Mic Session(Class of 2017) Powered by Boom Play Music and Ghetto Radio 89.5 . He begins his solo career on a high with an untitled project already in the works and everyone literally waiting to hear and see him maximize this major career move. 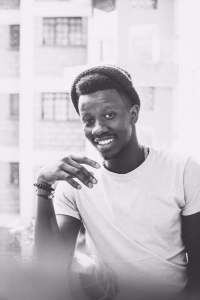 Asked on why Agency5ve settled on Muhanjii as the first artist under the Label, “Muhanjii has the thrill, zeal and energy new artists should have. I believe he can be a game changer in the Kenyan Christian Hip-Hop Industry and if everything works as planned he might actually just cross the East African borders” – Co-Founder Johnson Juma mentioned.

Label Executive Dennis Karenge and Co-Founder Albert Zakayo highlighted that the Labels desire to maximize on the advancement of digital media and technology in the music industry. ” Our mission is to put Kenyan Christian Hip-Hop music on the map as a premium region in the African scene.” – Label Executive – Dennis Karenge commented. With their A – List team already executing major moves ahead of Muhanjii’s first single release scheduled for next week, Agency5ve cannot wait to see the success of this relationship and looks forward to the addition of other new fresh artists to add to its roaster as time goes by.